The SmartEnCity project was presented at the event, which was attended by the mayors of various Basque municipalities, as well as those of Zaragoza, Castellón and Toledo.

Vitoria-Gasteiz is one of the three cities (along with Tartu, in Estonia, and Sondeborg, in Denmark) taking part in this European project, which is aimed at developing the European strategy for creating smart zero carbon cities.

In the case of Vitoria-Gasteiz, the project takes the form of the energy renovation of the Coronación district and is aimed at making the city greener and more carbon neutral.

Ensanche 21 Zabalgunea’s technical experts described the housing renovation policy being implemented by the Vitoria-Gasteiz City Council, and in particular by the Agree Project.

“Vitoria-Gasteiz is currently undergoing changes to its development model. The City Council has begun the process of reviewing the General Urban Development Plan and it envisages a model based on a more rational use of land in order to achieve a more compact and cohesive city and avoid urban sprawl. This new urban strategy is intended to be in line with the sustainable development of the region and the most advanced policies for managing built heritage.”. 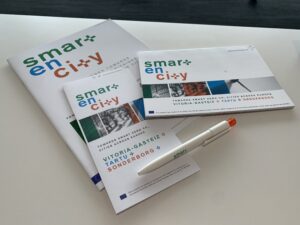 Ensanche 21 Zabalgunea is responsible for promoting, defining and developing different lines of work focused on renovating and/or regenerating districts of Vitoria-Gasteiz that were built between 1960-1980.

As far as façades are concerned, the different types of buildings are being analysed to determine what work needs to be done to them, and a study of the accessibility of buildings has been carried out to propose solutions in those cases where accessibility is still not possible for everyone.

Meanwhile, specifications are being drawn up for each type of building in degraded areas, including an estimate of the cost of the work to be carried out, so that residents can find out the expenses of the work and make their own decisions.